Looking for a sophisticated way to get around that's fun?
The Segway Ninebot S is a great option.

It's one of the best self-balancing scooters on the market and definitely a good quality piece of tech.

This machine takes the term 'self-balancing scooter' to a whole new level. Why? Because it's a scooter created as the modern commuter, rather than a novelty toy like many other hoverboards appear to be.

There's something about the Segway Ninebot S that just screams sophistication. It's fast, sleek and good for the planet. What more could you want?

Let's find out if this is the right electric rideable for you!

Segway Ninebot S is definitely not a kids' toy, which is clearly reflected by its design, features, and performance.

It's a self-balancing scooter that's not primarily made for recreation, but for practical use. So Segway has kept its look simple.

The hoverboard comes in two colours: White and Black, with an attractive red and grey finish that gives it a sleek, stylish look.

The Segway Ninebot S hoverboard - which includes the base, the detachable mini steering column, and the Knee Control Bar - weighs around 12.7 kg (28 lb). So it's not light, but Segway has made it easy to move around when not in use.

Extending the Knee Control Bar will initiate the Power Assist mode. This allows the scooter to be towed like a suitcase.

The frame and wheels are made from aircraft-grade magnesium alloy. This makes the hoverboard strong and long-lasting.

Although the Segway Ninebot S is not technically a hoverboard, it rides like one. And it's a smooth ride at that, thanks to the powerful 800-watt dual motor.

Segway's custom technology ensures a high level of rotations per minute (RPM) in both tyres. This gives the scooter a top speed of 16 kph (10 mph) and allows the scooter to maintain a steady speed on all types of surfaces without affecting the stability and performance.

The Ninebot S is fitted with a fast-charging battery that allows you to cover a fair distance - around 20 km (12.5 miles) - on a single charge.

The battery power status can be checked on the front panel of the hoverboard and through the phone app. It takes less than 4 hours to fully recharge the battery.

On mixed terrain, uneven surfaces and slopes, consider yourself lucky if you manage to get around 12 km (7.5 miles) per charge - around two-thirds its flat surface max distance.

A hoverboard’s balance and stability are of utmost importance. It becomes particularly important when you're changing riding surfaces - pavement to road, grass, gravel, etc. The Segway have put large 26.67 cm (10.5”) pneumatic tyres on the Ninebot S to make the ride over cracks and bumps nice and smooth.

The Segway Ninebot S has a unique drive system compared to other hoverboards we've seen. The specially designed Knee Control Bar controls the hoverboard's direction and speed. At the top end of this bar is a pair of cushioned semi-circle pads. Leaning or pressing against the pads will guide the hoverboard sideways, forwards or backwards.

Breaking is the same on the Segway Ninebot S as on any other self-balancing scooter - simply lean back on the footpads. The Knee Control Bar provides extra balance support.

As we've said before, the Segway Ninebot S is a well-made product. It's sleek and sturdy, and overall very safe to ride.

Before introducing the board to the market, Segway put the Ninebot S through a series of electrical and fire safety tests. Being UL 2272 safety certified and IP54 rated (meaning dust and splashing water won't affect the hoverboard's function) are among its accolades.

The Ninebot S hoverboard has various features not adopted by the majority of its competitors. One of these features is the lights. The Ninebot S has LED lights both on the front and back to allow for more visibility.

The built-in smart sensors automatically scan the surrounding brightness and turn on the LED lights if necessary. The smart lighting system allows the rider to concentrate on where they are going and not on whether or not they can be seen by others - the Ninebot S takes care of this for you.

The front light is bright enough to illuminate the path ahead, and the rear LED light signals your presence to anyone behind you.

Does the Segway Ninebot S have any other cool safety features?
Yes!

It has a state-of-the-art security system. Through the Bluetooth app, you can set a password to limit which devices can connect to the scooter.

You can lock the hoverboard through the app too. Locking the board will deactivate the auto-balance system and activate the anti-theft alarm. If the board is moved while locked, it emits a beeping sound. And an alert appears on your Bluetooth connected device.

As mentioned above, the app allows you to limit devices that can connect to the hoverboard and gives you the ability to lock the board, enabling the alarm.

As well as this, you can see all the statistics of the Ninebot S, including distance travelled, battery status, speed, etc.

You can customise the LED lights, such as changing the colour and style (e.g. intermittent, blinking, etc.)

The app also turns your phone or Bluetooth device into a Ninebot S remote control. So you can steer the scooter from your Bluetooth device. Isn't that crazy! Though we haven't found a practical use for this feature, it is very cool.

The scooter's steering system is simple and easy to pick up. The Knee Control Bar is unique to Segway products. It makes balancing much more natural compared to other scooters. The footpads on the base unit provide grip.

The Ninebot S has an inbuilt tutorial on how to ride the scooter safely. The board's maximum speed is limited until the rider completes this tutorial. We don't see this as a bad thing, as the Knee Control Bar between your legs does take some getting used to.

The tutorial involves using the basic functions of the Ninebot S hoverboard. This includes standing, stabilizing, making left and right turns and doing a 360-degree (clockwise and anti-clockwise) spin on the hoverboard. Then you have to demonstrate your riding skills by riding the Ninebot S forward and backwards for at least 10 metres (30 feet).

The large tyres of the Ninebot S make riding on cracks, small stones, sticks, and small bumps comfortable. The self-balancing scooter also fairs well on uneven surfaces compared to other hoverboards - though this is not what it is designed for.

Obviously, every hoverboard brand has its own pros and cons. The Segway Ninebot S comes with plenty of exciting features. We were certainly impressed by the large air-filled tyres allowing for excellent shock absorption. The large tyres significantly contribute to the smooth drive and they reduce strain on the rider’s knees and ankles.

Another unique feature is the front and rear LED light system. It’s an important safety feature; plus, the lights add to the aesthetic value of the hoverboard.

Other great (and fairly unique) features that we loved are the anti-theft alarm system, the remote control option (through a Bluetooth connected device), and the ability to tow the board like a suitcase.

The biggest issue we have with the Segway Ninebot S hoverboard is the knee control system. Hoverboard riders used to a wide stance have to make some adjustments for the Ninebot S. It's easy to learn, but it can be awkward to ride at first. The good news is, that once you adapt to the riding style, you don’t even notice it.

The Ninebot S is a premium hoverboard with a price that matches its status, and so is a little different to others on the market.

The Segway Ninebot S has set a new benchmark for other brands to follow. The product is unique, with its own control mechanism. 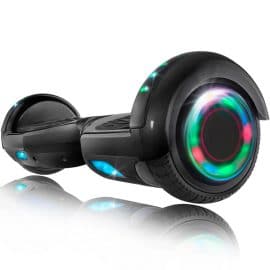 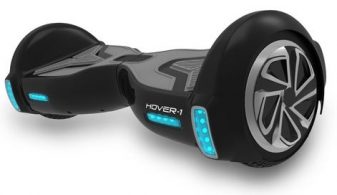 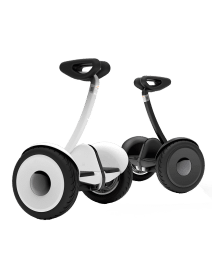 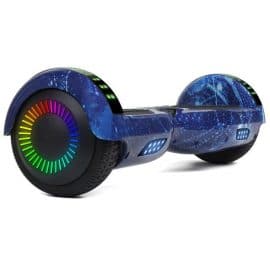 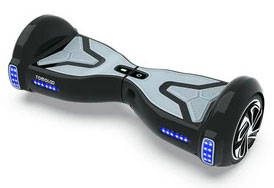 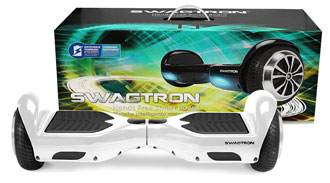